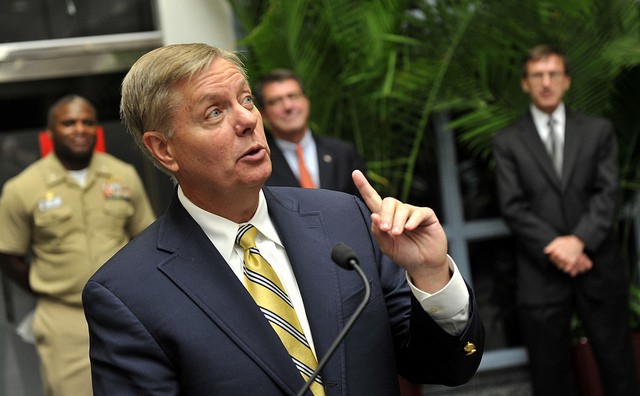 On Tuesday morning, Senator Lindsey Graham (R-SC) sat for an interview with NPR’s Mary Louise Kelly. The primary topic of discussion was President Trump’s national emergency declaration, specifically why Graham will not vote to block the declaration when the Senate considers the issue next week.

But plenty of other topics made the conversation.

I will admit that I have not been a fan of Senator Graham since the confirmation hearings for Supreme Court Justice Brett Kavanaugh. Graham was a hissing, screaming bully who operated under the impression that if he raised his voice the loudest and acted the most persecuted (maybe even threw in a hint of righteous indignation), he could get the job done and get the nominee confirmed.

It was also an odd display: one of the most genteel (almost, effeminate) gentlemen in the United States Senate having a tirade of toxic masculinity in support of a nominee accused of once being everything fathers do not want their teenage sons to become.

RELATED: The Really Big Brett Kavanaugh LIE No One Is Talking About

Ms. Kelly did not shy away from tough questions. She asked about bipartisanship, the future of emergency declarations under a prospective Democratic president, and about standing up to the president on Saudi Arabia and Syria. She even asked about his
own chances for reelection in 2020.

She asked, “What happened to the Lindsey Graham who called Donald Trump a kook?”

She asked if John McCain was rolling in his grave over Graham’s behavior as some have suggested?

The interview was a solid example of what the listening public should expect from journalists and the politicians & pundits they interview. The interview lasts around eight minutes. You can hear it at the link below.

There were, however, two questions I would have liked to see Ms. Kelly ask Senator Graham that did not find their way into the conversation.

The first question would be about what happened this weekend at CPAC, the annual meeting of the Conservative Political Action Committee. Conservative commentator Michelle Malkin took the stage and served enough red meat for the base in her twenty minutes that viewers might have been unsure if they were watching a political spectacle or eating at a cattleman’s BBQ.

What seemingly got the biggest reaction, a standing ovation from many in the audience, was when Malkin mockingly skewered the “ghost of John McCain”. It would have been interesting had Ms. Kelly asked Graham for his insights?

John McCain was a war hero who rotted for five and a half years in a Vietnamese prison camp, permanently crippled yet never deterred from continuing to serve.

John McCain should have been the 2000 Republican nominee, and it must have pained Graham when Karl Rove unleashed a disgusting and devastating attack on McCain in Graham’s home state of South Carolina that effectively ended the Republican primary in favor of George W. Bush. McCain, as he always did, bounced back and secured the nomination eight years later. When he lost to Barack Obama, McCain was gracious and was a steadying presence in the Senate during some very turbulent years.

The current Republican party mocks McCain. If they could, they would burn him in effigy. John McCain was one of the most beloved war heroes this nation ever produced yet he is mocked seemingly every day by a president who shirked his duty and who admitted to Michael Cohen that there were no bone spurs. There was only an excuse to get out of going to Vietnam. There will be some satisfaction, some karmic comeuppance,  if Robert Mueller (another hero of Vietnam who chose to serve rather than chose to hide) ends up being the man to finally take down Donald Trump.

At least Trump’s jailers will treat him better than John McCain’s did.

I would like to hear Senator Graham’s thoughts on this? How does he feel now, that in the era of Donald Trump, the Republican Party has abandoned all it stood for? They have abandoned all they once honored and are now represented by folks like Michelle Malkin, Sean Hannity, and Roseanne Barr, folks who spew hatred and denigration and racism every time they open their mouth? How does he feel about the man who was his best friend for four decades being a punch line to a joke by a bunch of degenerates and deplorables?

If you can stomach it, you can watch the Malkin speech below.

My second question for Senator Graham would be a little more direct. Seemingly every person who has been drawn into Donald Trump’s orbit since he announced his candidacy for president in June of 2015 has suffered a negative outcome.

Seriously, the guy is like a black hole sucking in and destroying anything that comes within his field of gravity.

Some are in jail. Some are on trial. Lots have been fired, had their reputations ruined, or quit under pressure. Many resigned often in disgrace.

And once they are out, (or in the case of Jeff Sessions, sometimes while they are still in), they become fodder for incessant attack by the president on Twitter or by the pundits on Fox News or by White House staffers in speeches and news conferences.

I cannot think of a single person in nearly four years who has become a part of Team Trump, even if only tangentially, and who came out of the experience BETTER than they went in. I would like to know why Senator Graham believes the same fate does not await him? Why does he think he alone will escape unscathed?

Maybe he knows he won’t, and is just enjoying being in Trump’s good graces for as long as he can?

Or at least long enough that he will not face a primary challenge in 2020.