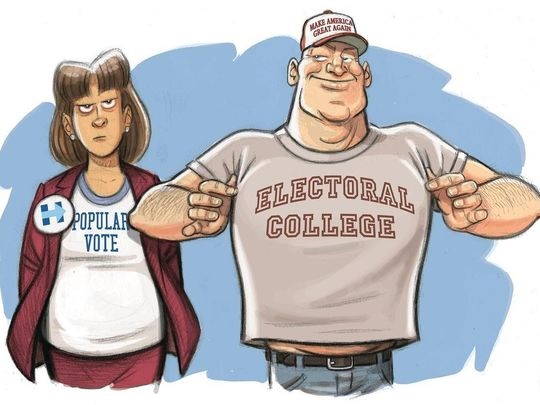 Let me begin by stating that what I am writing is pointless if the goal is actual change. The rules governing elections of the President and Vice President are specifically enumerated in the Constitution (Article II and Amendment XII). To change the rules would require a Constitutional Amendment. If anyone thinks we could get 2/3 of Congress and ¾ of the states to agree on ANYTHING, they have not been paying much attention the last few decades. So I can complain and explain, but I know the system is broken and those who broke it have no desire to see it fixed.

In one of his Federalist Papers, James Madison warned about the “mischief of factions” which he defined as “a number of citizens whether amounting to a majority or minority of the whole, who are united and actuated by some common impulse of passion, or of interest, adverse to the rights of other citizens, or to the permanent and aggregate interests of the community.”

Seriously, is that not what happened in 2016? A minority of the people voting united in anger and frustration to make a choice in the election that not only will not benefit their cause (or soothe their anger) in the long run, but which will have devastating effects on the nation a whole?

The Electoral College was designed to provide some protection for smaller-population states. For example, California has 10% of America’s population and is one of the most left-leaning states. Running up a massive popular vote edge there could tip the entire popular vote (as it did this year). But as America’s population has exploded (and our pool of Representatives has not), the system works increasingly against high-population states which are overwhelmingly liberal. The apportionment of Congressional seats (and thus, Electoral Votes) begins with the lowest population states and continues to the highest. That means the tiny states are guaranteed 3 Electoral votes while the large states (California, Texas, New York, Florida) get to divvy-up what is left but are left dramatically under-represented both in Congress AND in the Electoral College. This has turned into another miserable failure of the Electoral College. Sensing a pattern here?

And this is America, so would it really be possible there were not racist and sexist components to the creation of the Electoral College? In a 2014 L.A. Times article, authors Akhil and Vikram Amar argued:

“The founders’ system also encouraged the continued disfranchisement of women. In a direct national election system, any state that gave women the vote would automatically have doubled its national clout. Under the Electoral College, however, a state had no such incentive to increase the franchise; as with slaves, what mattered was how many women lived in a state, not how many were empowered … a state with low voter turnout gets precisely the same number of electoral votes as if it had a high turnout.”

Remember, women counted towards a state’s population when apportioning Electoral Votes, but could not vote. Slaves counted as 3/5 of a person, which again added significantly to population totals and electoral votes without giving slaves a vote.

Before yesterday’s Electoral Votes, two anti-Trump electors (one in Minnesota and one in Georgia) were replaced with Trump loyalists. An anti-Clinton elector in Maine (who initially cast a vote for Bernie Sanders) was forced to change that vote to Clinton as it was ruled that vote was “out of order” during the process.

Many states now mandate the electors cast votes on for the winner of the state.

So if the electors are not permitted to change the vote from what the majority-vote in their state decided, and if most would not anyway, and if the system has roots in racism and misogyny AND is undemocratic by allowing the minority to triumph over the majority (and the majority’s best interests)

…why in the hell do we still have the Electoral College?